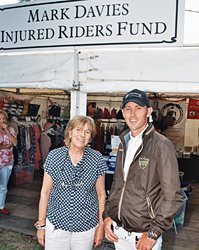 Coming just after Scott’s history making triumph in the Rolex Grand Slam at Spruce Meadows in Calgary, the charity is honoured to be associated with a rider of Scott’s calibre at the very top of the sport.

Scott clinched all three Major Grand Prix’s at Aachen, Spruce Meadows and Geneva riding the ever reliable Hello Sanctos, on whom he also won Team Gold at London 2012.

Administrator and Fund Coordinator Rosemary Lang said: “ we are all so thrilled to welcome Scott as a Vice President of The Mark Davies Injured Riders Fund.  it is wonderful to have such a hugely talented and respected rider on board to help us promote the work we do to help those injured in horse related accidents”

Securing the support of Scott Brash highlights the message that safety is paramount however good a rider you are – even if you are World Number 1! In equestrian sports nobody is immune from serious injury.

In his role as Vice President Scott has already carried out his first official duty by judging the ‘Best Dressed’ during Ladies Day at Hickstead that was held in aid of the Mark Davies Injured Riders’ Fund.

Let's get in touch

Give us a call or send us a message, we endeavour to answer all enquiries as quickly as possible.

Complete the form and we'll get back to you as soon as possible. Please check your spam folders for emails from Rosemary@mdirf.co.uk. Thanks
07710 788364
rosemary@mdirf.co.uk
This website uses cookies to improve your experience. We'll assume you're ok with this, but you can opt-out if you wish. Cookie settings ACCEPT
Privacy & Cookies Policy

Performance cookies are used to understand and analyze the key performance indexes of the website which helps in delivering a better user experience for the visitors.

Other uncategorized cookies are those that are being analyzed and have not been classified into a category as yet.

Any cookies that may not be particularly necessary for the website to function and is used specifically to collect user personal data via analytics, ads, other embedded contents are termed as non-necessary cookies. It is mandatory to procure user consent prior to running these cookies on your website.

Analytical cookies are used to understand how visitors interact with the website. These cookies help provide information on metrics the number of visitors, bounce rate, traffic source, etc.

Advertisement cookies are used to provide visitors with relevant ads and marketing campaigns. These cookies track visitors across websites and collect information to provide customized ads.